The history of whisky retailing in Australia

Whisky drinkers who discover that the near-empty bottle on their shelf needs replacing have a pretty easy time of it these days.

You can wander into almost any bottleshop in this country and find a half-decent selection of whiskies to choose from.  And, if you can’t see what you’re looking for and have the patience to wait a few days, you can go online and order it to be delivered to your door.

But it wasn’t always this way.  Notwithstanding that the range and variety of single malts has expanded exponentially in the last decade alone, there was once a time when Australian single malt lovers had to work pretty hard to find themselves a dram.  The history of whisky retailing in Australia – particularly Scotch whisky – shares many parallels with the Scotch industry itself…

The history of Scotch whisky is complex and lengthy, which we won’t go into here.  But quantum change occurred in the 1860’s when several key players developed blends that were more approachable, consistent, and of higher quality than some of the fiery spirit previously made available.   This, combined with the phylloxera crisis that destroyed the French wine/brandy industry, set the stage for blended whisky to become the spirit of choice for many households and consumers.

The early blended whisky houses and brands – Johnnie Walker, Dewar’s, Buchanan’s, etc – rose from this foundation, and – not surprisingly – the countries within the British Empire became convenient export markets.  Australia was a key beneficiary. 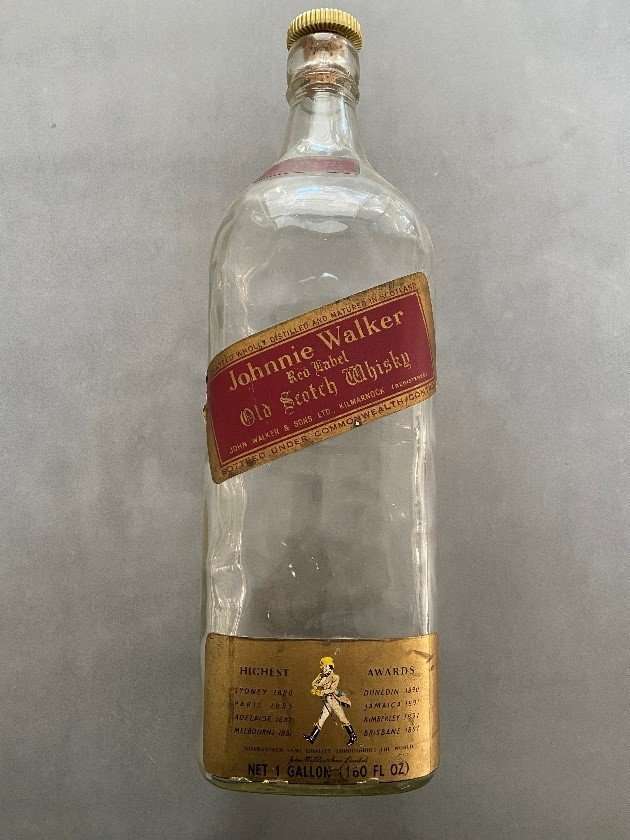 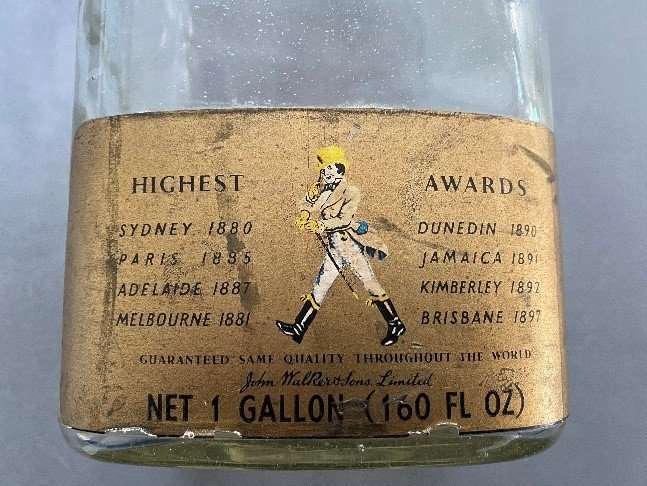 As early as the 1880’s, Johnnie Walker was firmly established in this country and finding success at Australian wine and spirits shows.  As this old bottle of Red Label illustrates, their “Old Highland” brand picked up awards in Sydney (1880, at the Sydney International Exhibition), Melbourne (1881), and Adelaide & Brisbane (1887).

A local office was established in 1888, and by the 1920’s, Johnnie Walker advertisements took pride of place on the front page of newspapers and magazines, such as can be seen here on this issue of The Bulletin from 1928. 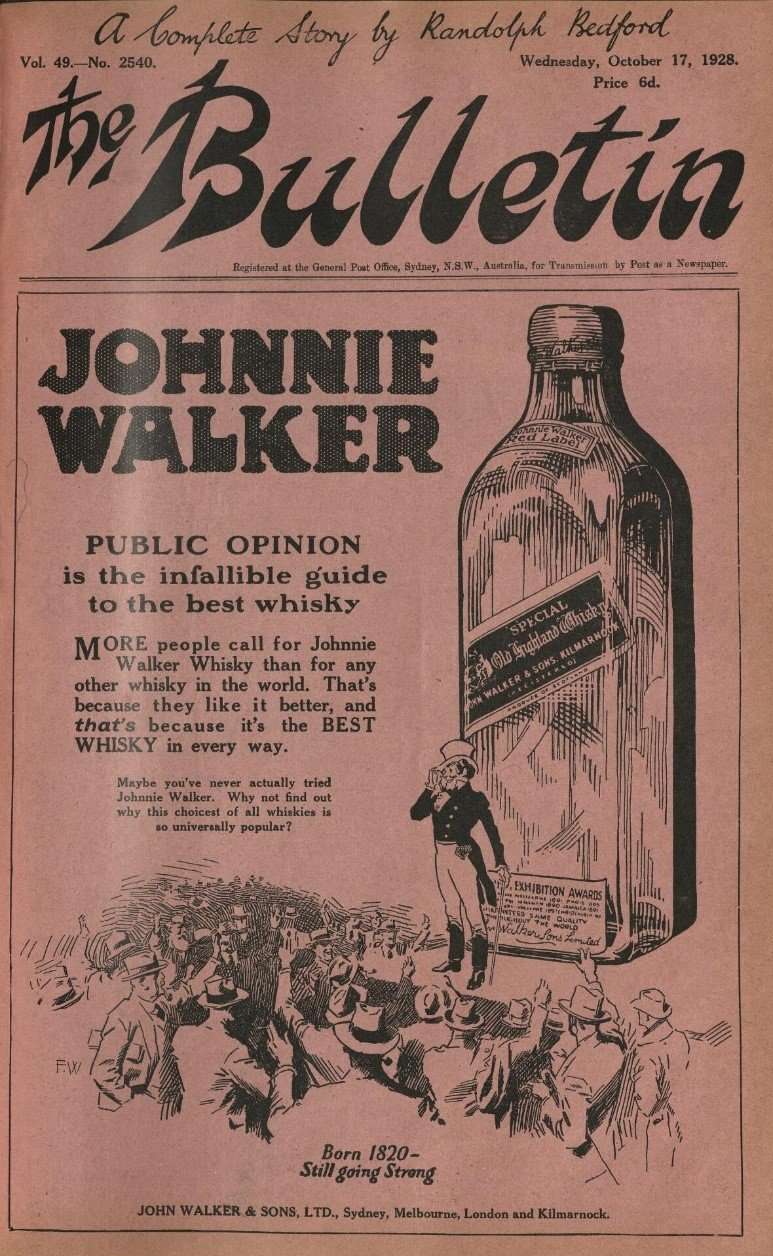 Australia was Scotland’s largest whisky export market after World War I, although the scene took an interesting turn in the mid 1920’s when the government introduced tariffs for imported spirits.  This made locally-produced whisky more attractive from a price perspective, and Australian whisky enjoyed significant growth and consumer support from the 1930’s to the 1960’s.

The Scottish brands wanting to establish themselves in Australia would appoint or form links with a local agent.  The agent would then be responsible for handling imports, promoting the product locally, and handling distribution to the retail arms.  (A situation that, for the most part, remains unchanged today).  Retailing, of course, took place through “bricks and mortar” shopfronts.

The retail scene consisted chiefly of licenced grocery outlets and specialist independent liquor stores, but that situation began to change from 1961 onwards when Woolworths – by then a national chain with over 300 stores – purchased an existing store that was already selling alcohol.  Realising they were on to a good thing, other existing Woolworths stores applied for licences in the 1960’s and 70’s, and thus the supermarket liquor chains came into being.  Woolworths consolidated all its liquor outlets into one trading unit in 1984, and in 1998 they acquired the Dan Murphy’s brand, which had been well established in Melbourne since 1952.  Woolworths subsequently went on to split and brand its stores with corresponding levels of prestige in 2001, with few people realising that BWS, First Estate, and Dan Murphys were ultimately all under the one ownership.\

Coles, Australia’s other main supermarket chain, followed a similar path a few decades later, making their first foray into liquor retailing with the acquisition of both the Liquorland and Vintage Cellars brands in 1981.  (Vintage Cellars had been established since 1951.)  Their 1st Choice brand was established in 2005, with the intention of competing directly with Dan Murphy’s.

But what about the specific retailing of single malts?

According to well-established legend, Dalmore was the first Scottish distillery to export its whisky internationally, way back in 1870.  As it happens, Australia was the destination country!  But single malt obviously played second fiddle to the blends in the ensuing decades, and all but disappeared.  The single malt category lay virtually dormant until 1963 when Glenfiddich became the first distillery to actively market its own product as a pure malt.

The story of single malt whisky appreciation in Australia – and thus by extension, retailing – then comes to life in the early 1970’s.

The two big players – Glenfiddich and Glenlivet – were available from the larger retailers, but not much more was on offer.  In 1970, a gentleman by the name of Robin Spratt established Spey Traders, an importing and distribution business that focussed purely on single malts.  He was responsible for importing the likes of Macallan, Jura, Longmorn, Tamnavulin, Glen Grant, Glenfarclas and Bruichladdich, and he supplied a number of specialist retailers with these rare lines.   Sheargolds in Sydney was one such retailer that specialised in single malts, and advertised in local media accordingly. 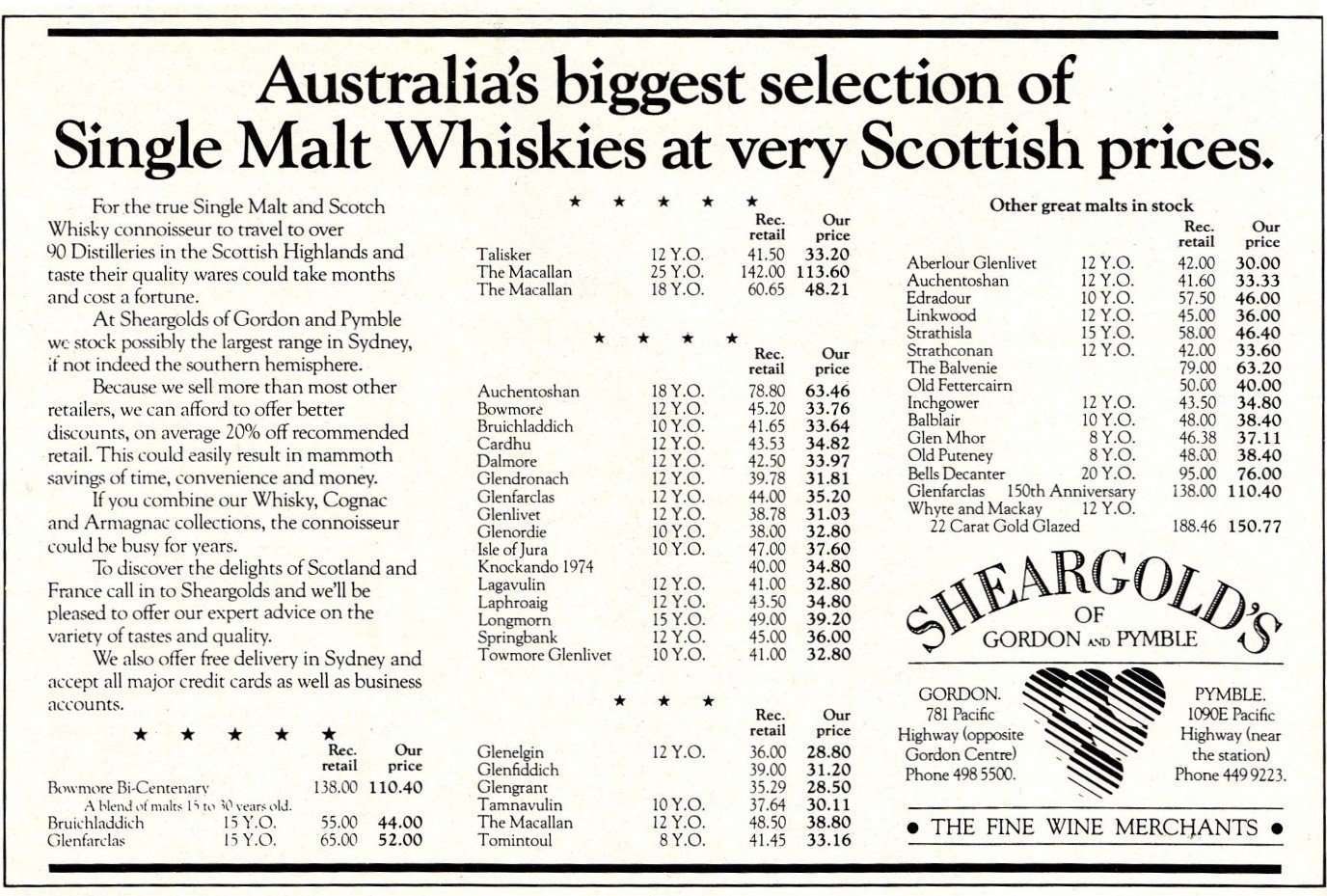 Spratt wound up Spey Traders by 1977, but the mantle was passed on quickly:  By the late 1970’s, another gentleman, Norman Case, who ran a small bottle shop out of Wollongong, had discovered the wonderful world of single malts (courtesy of a customer asking for a bottle of Highland Park, which was not available in the country), and he subsequently went on to establish Whisky Imports of Wollongong.  Case became the importer and distributor for numerous brands, and brought previously-unheard-of malts to Australia’s shores.  In addition to many distilleries’ own brands, he was also the distributor for independent bottlers such as Gordon & MacPhail.

Overlapping a little with Norman Case, David Le Cornu in Adelaide also became an independent importer of single malts.  The publican behind the famous Earl of Zetland Hotel – a pub that, at its peak, had over 360 malts on the back bar – Le Cornu brought in other brands and labels, including Cadenhead.

By the late 1990’s and the first year or two of the new millenium, you could walk into most better-stocked bottleshops and find around 10 to 15 different distilleries to choose from.

Glenfiddich, Glenlivet, Macallan, Highland Park, Bunnahabhain, Longmorn, Balvenie, Glenfarclas, Laphroaig, and the six Classic Malts from UDV (Glenkinchie, Oban, Dalwhinnie, Cragganmore, Talisker, and Lagavulin) were the usual suspects, with other names also floating about sporadically.  However, this meagre list was but a small representation of the 100-odd distilleries in Scotland.

Again, in a strangely linear handing on of the mantle, as both Case and Le Cornu wound down their operations, another entity stepped up.  And, by now, the internet had arrived to expand possibilities.  Courtesy of internet bulletin boards, forums and chat rooms, Australia’s whisky community was now suddenly linked.  And one particular retailer reached out and made the connection into that community.  Baily & Baily, a family-owned liquor business established in 1987, had a number of retail outlets in Adelaide by this time.

Prompted and initially guided by Le Cornu, their St George’s Cellars outlet became a destination store for malt whisky fans but, more importantly, they also operated an email subscription and newsletter service that went out to whisky lovers around the country.   This was, effectively, the first dedicated online whisky delivery operation in Australia.  Curated and operated by Graham Wright, Baily & Baily would bring in two or three shipments per year of whisky from distilleries, bottlers, and expressions otherwise unavailable in Australia, and subscribers would receive notification every three or four months or so of the latest arrivals.

Baily & Baily would eventually be acquired by Woolworths, and Graham Wright left for new pastures.

He subsequently set up a specialist online whisky business, The Odd Whisky Company, which picked up where Baily & Baily left off, and also became the importer/distributor for one or two smaller brands.

Online retailing was now very much “a thing”.  Nicks Wine Merchants in Melbourne was actually the first business to establish online sales of whisky, pipping Baily & Baily by less than a year, although initially on a smaller scale.  Once Baily & Baily was sold, “Nicks”, as it is affectionately known, took on the mantle of being Australia’s premium whisky retailer.

By the late 2000’s, the Scotch whisky industry was in boom, and the category expanded in every aspect.

Whisky bars – that is, bars/venues dedicated entirely to whisky – appeared in most of the capital cities, having been strangely absent for so long.   Licencing also changed in some states, allowing bars to have a retail arm and sell bottles over the counter.   Whisky clubs sprung up everywhere; brand ambassadors were back in vogue (having exited the scene for a few years); and single malt imports into Australia grew by 42% in the five years from 2007 to 2012.   New online/virtual retailers entered the scene; some major whisky companies dispensed with third-party agents/distributors and set up their own local offices; and new distributors appeared to take advantage of the growing number of distilleries needing representation.

More recently, a new retail format to appear and gain traction has been whisky subscription schemes.

Taking numerous forms, such as a bottle a month, or a selection of taster/sample packs, consumers can sit back and have new releases or samples delivered to them every month without lifting a finger.  In the current COVID environment with tasting events going virtual and social events being limited, subscription operations were certainly buoyed in 2020 and they continue to grow in 2021.

Bear in mind that much of the above commentary has focussed almost entirely on Scotch whisky, and single malts at that.  The last five years have also seen incredible growth in the Irish and American whiskey categories, and the Australian whisky industry now also has weight and presence in the retail scene.

These all make for exciting times, perhaps even challenging times for retailers trying to get ahead of the competition.  If you do find yourself in the situation of having finished a bottle and needing to buy a new drop for your daily dram, the question isn’t just “which one” but also “how and where from”.

Whisky is for grown ups.

You simply must  be over 18 to close this pesky pop-up and browse our range.